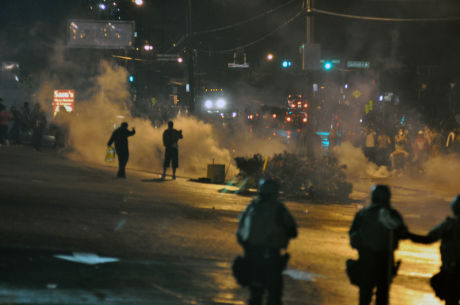 Are we about to witness a new round of racially-charged protests, riots and demonstrations all across the United States?  On Sunday night, a protest that had been organized to commemorate the one year anniversary of Michael Brown’s death in Ferguson, Missouri took a very violent turn.  An 18-year-old named Tyrone Harris that is being described as a “real close” friend of Michael Brown opened fire on police with a stolen handgun.  Police returned fire and Harris got hit.  He is now in the hospital and his prognosis is uncertain.  Of course this just raised tensions to an entirely new level, and at this point a state of emergency has been declared in Ferguson.

So what would cause an 18-year-old young man to pick up a gun and start firing at police?

This didn’t just happen in a vacuum.  An environment of violence and racial conflict is being purposely created, and the mainstream media and our politicians are continually fueling the fire.

On July 30th, the leader of the Nation of Islam, Louis Farrakhan, delivered a speech during which he stated that he was looking for “10,000 fearless men who say death is sweeter than continued life under tyranny”.  The following is an excerpt from that speech…

“Death is sweeter than to continue to live and bury our children, while white folks give the killer hamburgers.

“The Quran teaches persecution is worse than slaughter. Then it says, ‘Retaliation is prescribed in matters of the slain.’ Retaliation is a prescription from God, to calm the breast of those whose children have been slain.

“So if the federal government will not intercede in our affairs, then we must rise up and kill those who kill us. Stalk them and kill them and let them feel the pain of death that we are feeling.”

In the social media world, the ominous hashtags #fightback and #JusticeOrElse are being heavily promoted.  The implication is that African-Americans have a right to commit violence because of the injustices that have been committed against them in the past.

And on Sunday night, the “peaceful protesters” in Ferguson were repeating the following chant over and over: “Ready for what?! We’re ready for war!”

When you understand the context, it becomes much clearer why some of these young people are doing what they are doing.

Instead of trying to cool things down on Monday, protesters continued to push the envelope.  Several very prominent activists, including Cornel West, were arrested when they crossed a barrier in front of a courthouse in St. Louis…

Cornel West, and several prominent protesters including DeRay McKesson, 30, and Johnetta Elzie, 26, were arrested Monday afternoon during a protest outside the U.S. courthouse in St. Louis. The demonstration was part of a move by several clergy members to purposefully be detained by police.

Anger and violence are not what America needs.

If we could just learn to love one another and to treat one another with respect, things could be so much different in this country.

But instead, we are being set up for a race war.

An Alabama police officer was pistol-whipped with his own gun during a traffic stop — and then mocked by cop critics online.

The plainclothes Birmingham detective was investigating a string of burglaries when he stopped a GMC Yukon and was attacked by the driver, authorities said.

This particular police officer has never been charged with doing anything wrong, but just because he is a cop he was mercilessly attacked online.  The following are just a couple of examples…

“Pistol whipped his ass to sleep,” a Facebook user wrote before deleting a post showing the officer face down on the sidewalk.

Anger and frustration are growing to frightening levels all over the nation, and the surging poverty that we are seeing in many areas is playing a significant role in all of this.

Despite what you may be hearing from the mainstream media, the truth is that the economy is not getting better.  In fact, in a whole bunch of different ways our economy is already in worse shape than it was during the depths of the last recession.

If you live in a nice neighborhood, you may not even be aware of what is going on in much of the rest of the country.  According to the Atlantic, the number of Americans living in high poverty areas has nearly doubled since the year 2000…

The number of people living in high-poverty areas—defined as census tracts where 40 percent or more of families have income levels below the federal poverty threshold—nearly doubled between 2000 and 2013, to 13.8 million from 7.2 million, according to a new analysis of census data by Paul Jargowsky, a public-policy professor at Rutgers University-Camden and a fellow at The Century Foundation. That’s the highest number of Americans living in high-poverty neighborhoods ever recorded.

The development is worrying, especially since the number of people living in high-poverty areas fell 25 percent, to 7.2 million from 9.6 million, between 1990 and 2000. Back then, concentrated poverty was declining in part because the economy was booming.

Don’t let the misleading economic numbers fool you.  As Paul Craig Roberts has pointed out, if honest numbers were being used our current unemployment rate would not be too far away from the unemployment rate at the height of the Great Depression…

But instead of telling us the truth, the mainstream media continues to put out lots of happy stories.

For instance, one of my readers just sent me this one: “4 signs the Des Moines economy is surging“.

I had to smile when I saw that.  You know, even though the U.S. economy has been collapsing, it is collapsing right now and there are all sorts of signs that our collapse is about to greatly accelerate, there are still lots of people out there that mock “the collapse crowd” and insist that everything is going to be just fine.

And of course the mainstream media continues to mock anyone that is seriously trying to prepare for the coming hard times.  The following is an excerpt from a recent Toronto Star article…

If a Katrina-like storm knocked out power in Toronto, you’d know the preppers by the lights in their windows, running on generators. And if things ever descend into chaos, they’ll grab their prepacked bags, loaded with essential survival equipment, and split, leaving the rest of us to fight over the last drops of gasoline and fresh water.

But those that are wise understand what is happening, and they are preparing in advance.