Funny how these hypofrontal Marxists try to take the moral high ground when Marxists are the most prolific murderers in history. 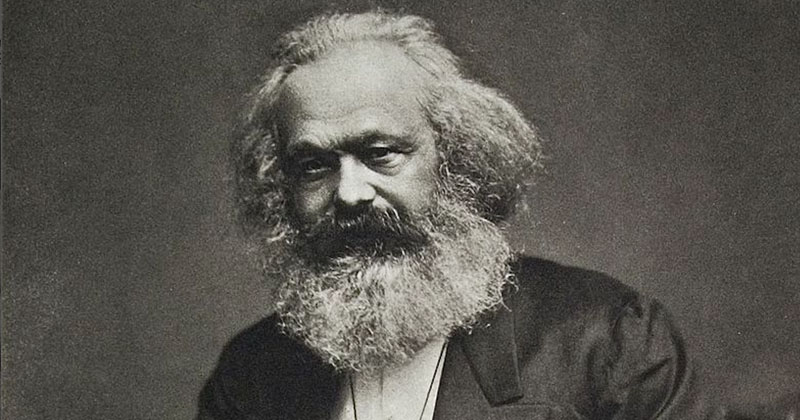 Sadly, in today’s world, the term “racist” is lobbed at people with reckless abandon. This is not to say that there aren’t real racists in our midst, but the benchmark for accusing someone of racism has become woefully low in our current climate.
Yet, somehow, as radical leftists tear down statues of everyone and anything the mob thinks represent racist attitudes, including statues commemorating the end of slavery, Karl Marx—a clear-cut racist—has evaded the woke mob’s wrath.Before we get to the quotes, it’s worth noting that for Marx, racism wasn’t separate or contradictory from his ideological (socialist) views. Marx believed, as many of the quotes below illustrate, that for “progress” to occur, some ethnic groups and nations had to be swallowed up by more powerful groups.

Of course, Marx believed there would eventually be no need for nations, because the workers of the world could unite without the need for countries. But before that could happen, the backwards peoples of the world would need to be eliminated or join the worldwide revolution for communism. This was inevitable and scientifically proven, Marx believed.

Below are several quotes illustrating Marx’s racism. Although it should go without saying, please note that we at StoppingSocialism.com believe the following quotes are reprehensible. We are providing them to you now so that you can see just how disturbing Marx and many of his early followers were.

“What is the worldly religion of the Jew? Huckstering. What is his worldly God? Money. … Money is the jealous god of Israel, in face of which no other god may exist. Money degrades all the gods of man—and turns them into commodities. … The bill of exchange is the real god of the Jew. His god is only an illusory bill of exchange. … The chimerical nationality of the Jew is the nationality of the merchant, of the man of money in general.” Karl Marx, “On the Jewish Question,” 1844

“This splendid territory [the Balkans] has the misfortune to be inhabited by a conglomerate of different races and nationalities, of which it is hard to say which is the least fit for progress and civilization. Slavonians, Greeks, Wallachians, Arnauts, twelve millions of men, are all held in submission by one million of Turks, and up to a recent period, it appeared doubtful whether, of all these different races, the Turks were not the most competent to hold the supremacy which, in such a mixed population, could not but accrue to one of these nationalities.” Karl Marx, “The Russian Menace to Europe,” 1853

“The Jewish nigger Lassalle who, I’m glad to say, is leaving at the end of this week, has happily lost another 5,000 talers in an ill-judged speculation. The chap would sooner throw money down the drain than lend it to a ‘friend,’ even though his interest and capital were guaranteed. … It is now quite plain to me—as the shape of his head and the way his hair grows also testify—that he is descended from the negroes who accompanied Moses’ flight from Egypt (unless his mother or paternal grandmother interbred with a nigger). Now, this blend of Jewishness and Germanness, on the one hand, and basic negroid stock, on the other, must inevitably give rise to a peculiar product. The fellow’s importunity is also nigger-like.” Karl Marx, “Marx to Friedrich Engels in Manchester,” 1862

Tremaux “proved that the common Negro type is the degenerate form of a much higher one … a very significant advance over Darwin.” Karl Marx, letter to Friedrich Engels, August 7, 1866

“Take Amsterdam, for instance, a city harboring many of the worst descendants of the Jews whom Ferdinand and Isabella drove out of Spain and who, after lingering a while in Portugal, were driven out of there too and eventually found a place of retreat in Holland. … Here and there and everywhere that a little capital courts investment, there is ever one of these little Jews ready to make a little suggestion or place a little bit of a loan. The smartest highwayman in the Abruzzi is not better posted about the locale of the hard cash in a traveler’s valise or pocket than these little Jews about any loose capital in the hands of a trader … These small Jewish agents draw their supplies from the big Jewish houses … and practice great ostensible devotion to the religion of their race.” Karl Marx, “The Russian Loan,” 1856

“Thus we find every tyrant backed by a Jew, as is every Pope by a Jesuit. In truth, the cravings of oppressors would be hopeless, and the practicability of war out of the question, if there were not an army of Jesuits to smother thought and a handful of Jews to ransack pockets. … The fact that 1,855 years ago Christ drove the Jewish money-changers out of the temple, and that the money-changers of our age, enlisted on the side of tyranny, happen again to be Jews is perhaps no more than a historic coincidence.” Karl Marx, “The Russian Loan,” 1856

“The expulsion of a Leper people from Egypt, at the head of whom was an Egyptian priest named Moses. Lazarus, the leper, is also the basic type of the Jew.” Karl Marx, letter to Friedrich Engels, May 10, 1861

“Abraham, Isaac and Jacob were fantasy-mongers, that the Israelites were idolators … that the tribe of Simeon (exiled under Saul) had moved to Mecca where they built a heathenish temple and worshipped stones.” Karl Marx, letter to Engels, June 16, 1864

“Indian society has no history at all, at least no known history. What we shall call its history is but the history of the successive invaders who founded their empires on the passive basis of that unresisting and unchanging society.” Karl Marx, New York Daily Tribune, August 8, 1853

“Russia is a name usurped by the Muscovites. They are not Slavs, do not belong at all to the Indo-German race, but are des intrus [intruders], who must again he hurled back beyond the Dnieper, etc.” Karl Marx, letter to Friedrich Engels, June 24, 1865.